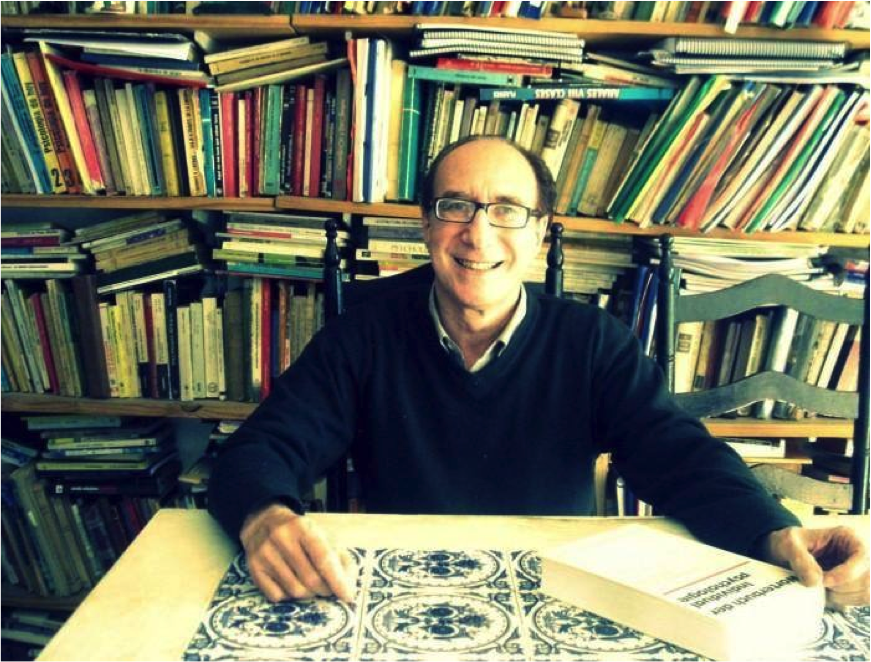 Yair Hazán Trasante (October 31st, 1953, Colonia – May 6th, 2015, Montevideo) was a professor, psychologist, Didactic Analyst and Honorary President of the Adlerian Study Centre. He was recognized as the natural leader in spreading Alfred Adler’s thought in the Spanish language; distinguished in the 26th Congress of the International Association of Individual Psychology (IAIP) held in Paris – France in July 2014. Author of several scientific publications, a columnist for the “Periódico El Øtro Psi”, official newspaper of Universityof Buenos Aires and in the Newsletter of Adlerian Studies Centre.

He was born on October 31st, 1953 in Juan Lacaze, Department of Colonia on the River Plate. His father was a Mussulman from the Ottoman Empire and his mother was Uruguayan from an Italian family. He was the youngest of two sisters and one brother, as he said: “son of old age”. He grew up with the Roman Catholic Apostolic Church values and as from his childhood he learnt to live with the religious diversity. He never denied the influence he had had from some priests from the Clergy and Salesians on his ethic, social and intellectual life.

Besides, coming from a workers leftist vanguard city, he took, as from, a very early age a compromised political position to finish with social injustice and violent attack of the dominant social classes.

In times of Uruguay military dictatorship he was discharged from teaching, suffering very serious physical, psychological and social attacks on part of the military.

1972When Rudolf Dreikurs died he became a member of a teaching formation with out knowing that his name existed. Besides, the same year the only book there was of Dr. Rudolf Dreikurs was proscribed, “Como lograr la disciplina en el niño y en el adolescente” (Original title: “A Parent’s Guide to Child Discipline”) writing in collaboration with Loren Grey, Paidos Editorial. He could not read it because as Prof. Hazan said in “Homage to Rudolf Dreikurs”(2009) in the University of the Republic with the special invitation from Dr. Eva Dreikurs Ferguson:

“the imperialism hit us with dictatorships in all Latin America. And Adler and Dreikurs works were forbidden. Because Adler had been a social militant so had Dreikurs. And this was not looked on as a good thing by fascist authorities of the time (…) All the men on depth psychology are pages from the same book but Adler and Dreikurs gave us a peculiar contribution with the participation and the power to reach the valour of these other men. To leave the inferiority feeling which they have put on us but which we have been an accomplice and accepted it”

1997When the democracy was re-established,the Center of Adlerian Studies was founded in the Pedagogic Museum of Montevideo – Uruguay, after more than ten years of preparation. It was sixty years since Adler had died and a centenary since Dreikurs’ birth.

2007 The first Adlerian Internacional Congress was organized: “Everything could be different” at the Kolping Institute Uruguay

2010 He went to University of El Salvador (UTEC) for the main lecture titled: “How to avoid violence from Psychological point of view of Alfred Adler”.

2011 He took part in 25th Congress of the International Association of Individual Psychology (IAIP) at the University of Vienna and reburial of Alfred Adler’s ashes at the Central Cementary of Vienna.

He published a book as co-writer with Dr. Michael Titze (Germany) “Fundamentals of DepthTeleologicalPsychology”, Psicolibros Editorial.

2012-2013 He took part in various congresses and seminars organized by Federación Uruguaya de Psicoterapia (Fupsi) and Symposium of University extension given by Adlerian Center Studies, free and open to all the public.

2014 He took part  at 26th Congress of the International Association of Individual Psychology (IAIP)  in Paris.

He founded the first course en permanent formation of “Compared Adlerian Psychology” at the University of the Republic.

According to Clemente Estable: “to remember is such a surprising miracle like creation. Remembering is to go back to a little dreamt reality.  Memory is light of life and in this light the day remains at night (…) It is the only thing reversible in time, which matures the experience.  To remember the best is an exercise in refinery because the best can only be remembered by the best of ourselves”.

His life should be translated as one of a man of good works, essentially in favour of the most humble, the most needed should benefit from his help, advice and counselling  of the most diverse  fields. His culture was so ample there, that it went from  the most practical and aplicable knowledge to the most abstract. We can be convinced that his, “as if”, the icon of the archetype of the “old wiseman”.

The Adlerian Studies Centre (CEA) will continue his works because the seed has being sown in fertile ground the people are involved in improving his work, challenge which will imply redoubling the effort and preparation.

His ashes were strewn to the wind, complying with his will. The chosen place was “The lighthouse of Punta Carreta”of Montevideo, on the River Plate because it meant that the name Yaír is “illuminate”. Orange gerberas flowers were thrown and the poem “The Calling” byRabindranath Tagore was read and the emotive letter from our dear Adlerian friend Alyson Schafer.

The Memory is inscribed forever in the message which we sent from the Board of CEA on the day of his decease:

Mister Didactic Analyst Prof. Yaír Hazán has left us and will always remain with us on Wednesday the 06 of May 2015. The best of him is in each one of us who had him as a professor, psychotherapist and friend with a common goal: “help people to be free and responsible”and expand the message of Adlerian thought. He never went on holiday and when they asked  him why, he liked to say as Don Bosco: “I will rest when I die”. Now he is resting in peace.